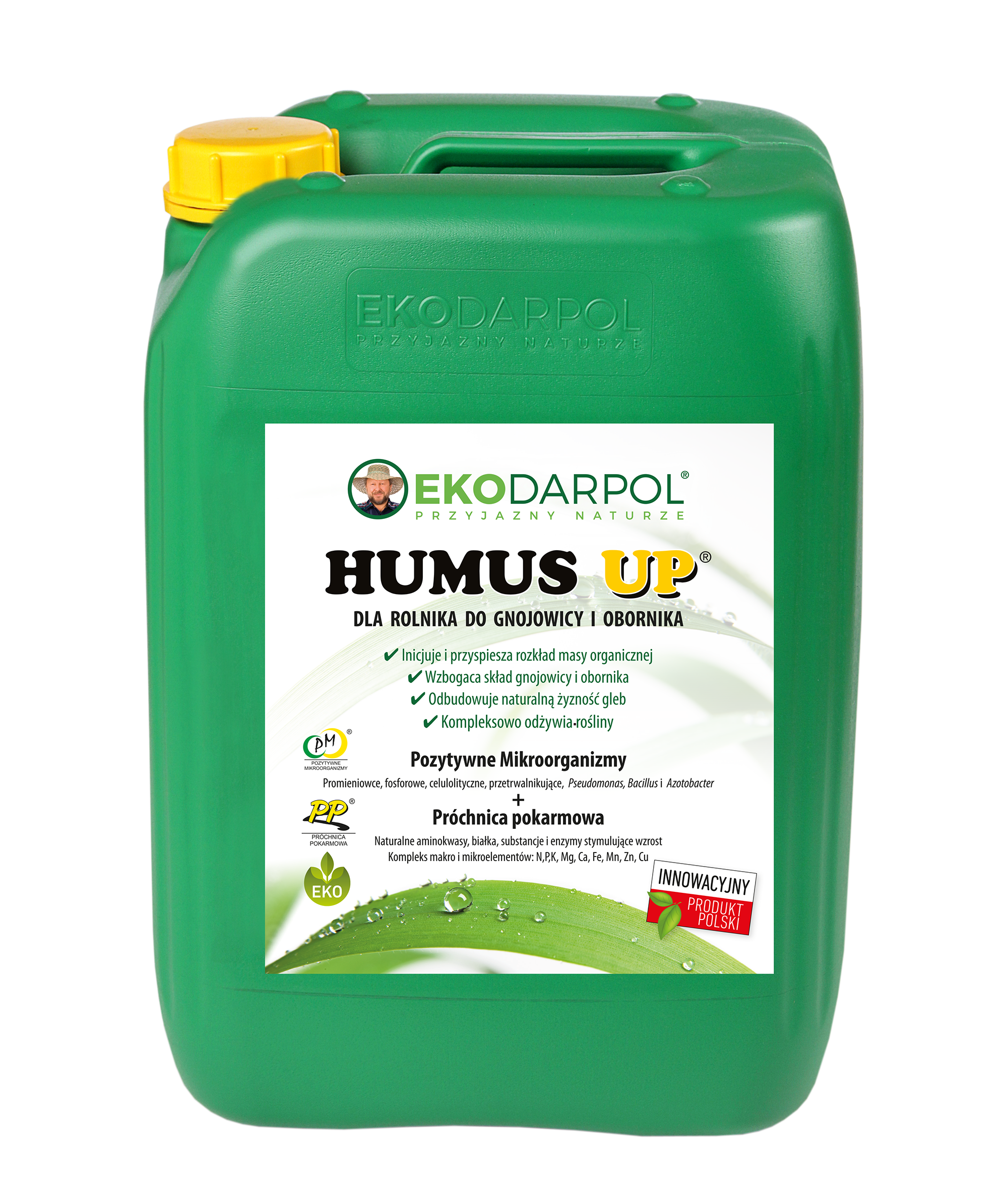 Produces excellent growth results in both organic and traditional cultivation. HUMUS UP significantly stimulates biological life, brings about high yields and healthy crops even on poor, degraded soils. HUMUS UP restores the natural resistance of plants to stress and pathogenic factors, and restores the microbial balance.

– Restores the natural resistance of plants, – Regenerates plants after chemical spraying,
– Stimulates plant growth,
– Restores microbial balance,
– Increases the profitability of agricultural production,
– Helps the soil retain more nutrients in the root zone,
– Accelerates the decomposition of organic matter to form humus
– Contains macro-, micro- and ultra-elements in proportions optimal for plant growth,
– Contains microorganisms that make nitrogen available to plants as a nutrient (up to 70 kg/ha),
– Improves the rooting of plants,
– Does not require a pre-harvest waiting period,
– Safe (no risk to human or animal health, or to the environment),
– Certificate of product qualification for use in organic farming

HUMUS UP contains billions of PMs (Positive Microorganisms) that come from the manure of hoofed animals from non-intensive farms that has been improved by Californian earthworms. PMs assimilate nitrogen from the air (Azotobacter bacteria) and release soil-bound nutrients such as nitrogen (photosynthesizing bacteria) and potassium, phosphorus and micronutrients (radial bacteria). PMs induce the development of mycorrhiza, which is necessary for the normal development of the root system. PMs rapidly break down organic waste (crop residues, leaves, stalks), thus supplying nutrients and nutritive humus to plants. The rapid decomposition of organic matter and the dominance of PMs significantly limits the development of pathogens that cause plant diseases, including fungal diseases.

HUMUS UP contains billions of colloids of nutritive humus, which constitutes a balanced source of food for plants.

The product is safe for people and animals. The working liquid of HUMUS UP does not require a pre-harvest waiting period.

Foliar treatment –  Spray with 5% HUMUS UP during the vegetation period and after each chemical spraying. Soil treatment – for use on degraded soils to restore microbial balance and accelerate the decomposition of soil organic mass. Spray with 5% HUMUS UP after harvest. SPRING, SUMMER – foliar treatment from the start of vegetation until harvest. Spraying with 5% HUMUS UP is recommended after each chemical spray. AUTUMN – as top dressing or incorporated into the soil, provided the average daily air temperature is not below 5°C. It is best to apply before the planned soil cultivation or during rainfall so that nutrients can get into the root zone.

Store at a temperature not lower than 5°C and not higher than 30°C. Do not combine with plant protection products, mineral fertilizers and other products of chemical synthesis. Certified for use in organic farming under the reference number NE/226/2013.